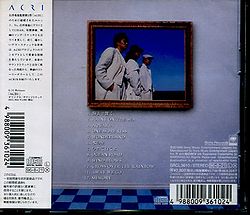 Ishii Tatsuya directed two films, Kappa (1994), and ACRI ~The Legend of Homo-Aquarellius (1996). He would team up with artists Char and Nobuo Ariga to produce a soundtrack for the movie, under the band name ACRI, then they released a single and a homonymous album with twelve original songs. 11 years later, Ishii released ACRISM, a new album with old and rearranged songs from movie soundtrack and ACRI.