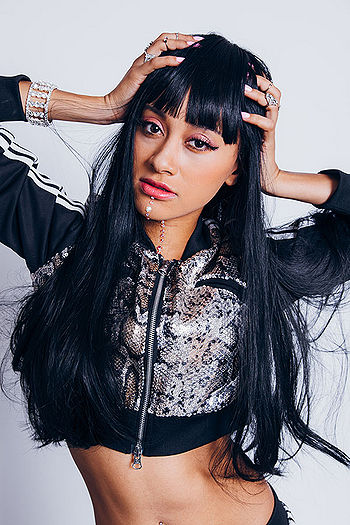 AISHA is an American J-R&B singer, who debuted in 2010 with her mini-album AISHA.EP. She was first signed under Sony Music and in 2015 she switched to SPACE SHOWER MUSIC.

Aisha’s father was a professional trombonist in America. He has accompanied many artists and also toured as a supporting musician. Her mother joined many compilation albums as a singer in Japan. She learned modern ballet and jazz dance from the age of three to twelve. At the same time she started taking vocal lessons which opened her up to gospel, standard and classical music. This gave her the opportunity to achieve one of the highest scores at the Kanto Plain Solo and Ensemble Festival. She performed at Billboard Tokyo as a guest singer for Guru from Gangstarr, the hip hop legend that represented the 90’s. She also collaborated with the best selling house DJ and producer in Japan, MAKAI in the cover album LEGEND. She sings at live houses and clubs. Despite her looks, Aisha sings heartfully with different types of emotions.