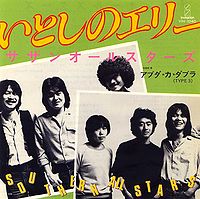 "Abra Ka Dabra (TYPE 3)" is a song recorded by Southern All Stars and included as B-side of their single "Itoshi no Ellie". The song was used as CM theme song for Nissin Yakisoba UFO. TYPE 1 and 2 of the B-side were released ten days later on their second album .