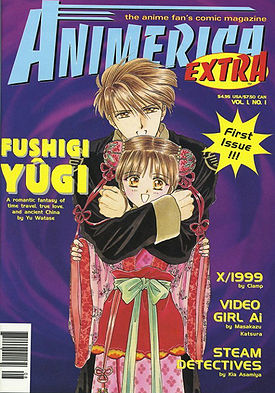 Animerica Extra was a monthly manga anthology magazine released by Viz Media. The magazine got it's start in 1998 and started out with four series, which were a mixture of both shojo (Fushigi Yuugi and X/1999) and shonen (Steam Detectives and Video Girl Ai) comics.

In December 2002, Yoshida Akimi's Banana Fish was added to the line up, after Viz's PULP adult orientated magazine ended, where it originally ran.

In 2003, after a lot of the magazine's series were finishing up their runs, Viz decided to make Animerica Extra a shojo only magazine. The last issue featuring both genre's was December 2003, and during that issue, Marionette Generation, Shoujo Kakumei Utena, and Short Program 2 finished up. It's unfinished shonen series: Steam Detectives and Video Girl Ai, were moved to graphic-novel-only format. Not long after this change, the magazine was cancelled, with the last issue being December 2004. All of it's remaining series were then moved to graphic-novel-only format.

These were the series that were still running at the time the magazine ended.