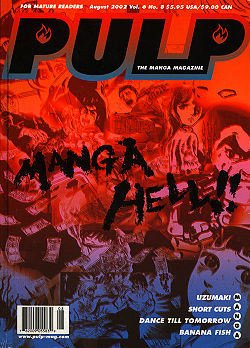 PULP was an North American-based, monthly manga magazine, published by Viz Media. Unlike the other manga magazines at the time, such as Viz's Animerica Extra and Tokyopop's MixxZine and Smile, the magazine was aimed towards a mature audience. The magazine contained a variety of seinen series: some horror, some with strong sexual themes, and also some violent series. The first issue hit shelfs in 1997.

These were the series that were still running at the time the magazine ended.