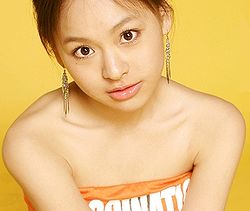 Aoi Tsubaki is a Japanese pop artist under GIZA studio. She is the vocalist, guitarist and lyricist of the group PINC INC.

Aoi Tsubaki had her major debut on April 11th, 2007 with the single "Mirai wo". The main song was written and composed by Yoko Blaqstone, while the coupling song was written by Aoi herself. Her second single "Kono Yubi Tomare!" was announced for August 29th, 2007 but it was canceled.

In March 2008, she debuted as the front woman of the group PINC INC.