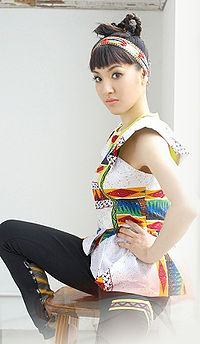 Arakaki Hitoe (新垣仁絵) is a Japanese singer, dancer and actress.

Arakaki Hitoe is the oldest member of the Japanese pop group, SPEED. She is from Okinawa, and is also known purely by her first name, HITOE.

After the group split momentarily, she went to study dancing abroad in New York City. When her return to Japan, she resumed her music career as a solo artist on the Avex label where she has released a couple singles and a full album.

She is also into art and has held a few art exhibitions and some of her arts were used for special edition of Pepsi and the cover of some compilation CDs. The award ceremony of Girl-only 「Arsoa Art Wave 2005」 Art Competition was held in Tokyo on Oct 4. Being the judge, Hitoe also attended the ceremony.