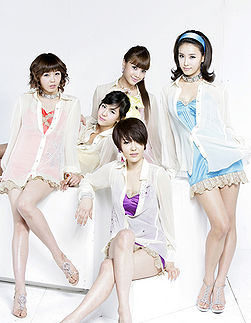 Baby V.O.X Re.V (베이비복스 리브) is a spin-off group of the popular girl group Baby V.O.X. In 2008 the group got rid of the "Re.V" and promoted as Baby V.O.X, although not as the former group, but a new one with the same name. The group hasn't released anything since 2008 and is suspected to be either on hiatus or disbanded.