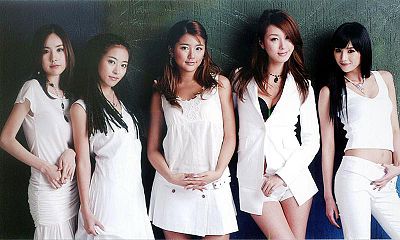 Baby V.O.X (베이비복스; Baby Voice of Xpression) was a Korean female group considered one of the big three female K-pop group forerunners in the late 90's (alongside S.E.S and Fin.K.L). They debuted in 1997 and from that time until 2004, released seven albums. They officially broke up in March of 2006 after all members but Lee Hee Jin, Kim E-Z and Kan Mi Youn left to pursue other activities. 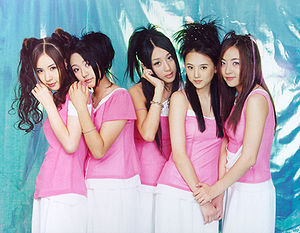 Unfortunately, during the middle of the first album activities, lead singer Hyun Jun left the group for unknown reasons. One member short, they recruited a new member, Kan Mi Youn, to bring the number back up to five. On stage, Kim E-Z filled the part of lead singer in place of Jung Hyun Jun, and Kan Mi Youn filled E-Z's original part.

Despite their hopes, their first album first lead track, "Meorihaneun Nal", didn't make it very high on the charts, and their album sales were disappointing. After this disheartening debut, they faded into obscurity, and members Jung Shi Woon and Cha Yumi left.

During December of that year, the group undertook efforts to make their second album better, living together to strengthen their teamwork, and building up physical strength for their new album's dance by practicing Taekkyeon. In August of 1998, Baby V.O.X was reborn with a cute image to contrast the tougher image of the first album and with two new members, Shim Eun Jin and Lee Gai. Kim E-Z now held the role of leader and rapper, and Lee Hee Jin became the lead singer.

Their lead track from their second album, "Ya Ya Ya", gained great popularity with its cute, catchy sound. Their follow-up song, "CHANGE", also did very well, reaching the top ten in the charts with its slightly more mature and sexy style. Of note in the second album is the remake of the The Carpenters' song "TOP OF THE WORLD". Not only is the song sung in English, but each member also learned to play an instrument for the sake of the song. 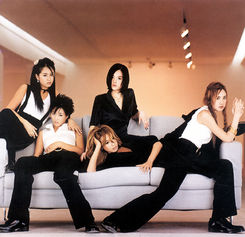 Thanks to their reasonable success, Baby V.O.X now had made a name for themselves in the K-Pop scene. However, they still were not through their difficulties, as new member Lee Gai was forced to leave the group for lying about her age. In the final member change of the group, she was replaced by Yoon Eun Hye in the third album.

For their third album Come Come Come Baby, Baby V.O.X once again reinvented themselves with a sexier image, they gained success with their third title song "Get Up" as well as the follow up songs "Killer", and "Missing You". After becoming known for member changes, Baby V.O.X had finally found their perfect line up.

With each album, Baby V.O.X boldly took on new styles and gained more popularity and fans, finally earning a name for themselves as one of the big three female K-pop groups alongside S.E.S and FinKL. They also became popular in China and released one mini-album, Go in Japan.

On December 27, 2004,Shim Eun Jin left the group in order to focus on a solo career. The group carried on activities as a four member group until July 25, 2005, when Yoon Eun Hye also left, wanting to pursue a career in acting. Despite the loss, the remaining three members still had plans to continue performing and also to release a new album by the end of 2005.

The album plan was never realized, and on January 25, 2006, leader Kim E-Z left the group to also focus on her career as an actress. At that point, though down to only two members, DR Music was still contemplating how the group could continue. However, on March 8, 2006, Kan Mi Youn left DR Music to sign with H2 Entertainment as a solo artist. With only Lee Hee Jin left, Baby V.O.X was officially announced as broken up.

For their seventh album, RIDE WEST, Baby V.O.X tackled the hip-hop genre, declaring themselves to be a hip-hop group and releasing a song, "Xcstasy", that featured rap from the legend Tupac Shakur. Though the group's company claimed that they had permission to use Tupac's vocals, this move not only angered hip-hop fans, but got the group into legal trouble.

On April 8, 2004, Amaru Entertainment released a statement on the official Tupac website stating that they would be taking aggressive action against Baby V.O.X and their production company, DR Music, to stop the "unlicensed and unauthorized exploitation of Tupac Shakur's music, trademarks and personality rights." Nothing ever came of that action. And if so, nothing was released to the public and it was never Baby V.O.X the group who would have been sued, it would have been DR Music.

On December 26, 2006, DR Music unveiled the members of the new Baby V.O.X, a spinoff group called "Baby V.O.X. Re.V" (pronounced "Reeve"). The group released their first single, "Shee," in January 2007. Compared to the original Baby V.O.X, this version had a much more mature and sexual image.