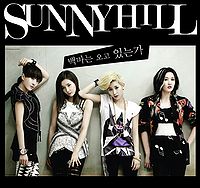 "Baegmaneun Ogo Inneunga" is Sunny Hill's sixth digital single. It includes a remix version of their third single "THE GRASSHOPPERS" lead track, "Bejjangi Changa". The single was Sunny Hill's first release (not including the digital soundtrack single "Salamander Guru and the Shadow Operation Team OST Part.2") without Janghyun who was on his military service, becoming the group's first release with an all-female line-up.