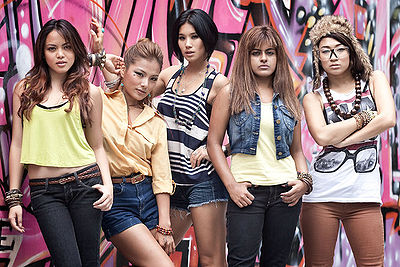 Blush is a Pan-Asian girl group formed by the Hong Kong based label FarWest Entertainment on November 10, 2010. They are one of the first Asian girl groups to hit number one on the Billboard Dance Chart. They made their U.S debut on during an episode from the American reality dance show So You Think You Can Dance with Snoop Dogg and their live performance debut opening for Justin Bieber during the Hong Kong leg of his My World Tour.

On February 22, 2011, they started uploading short series of their everyday life, behind the scenes, and personal meet-ups with fans. The first artist the group opened and closed for was Justin Bieber during his My World Tour in Chek Lap Kok, Hong Kong on May 13. Blush released a lyric video to their first single "Undivided" on May 22. They later released an animation video to that single on June 13. They finally released the official video to their single on July 22. On August 26, the group's official YouTube released a lyric video of "Fell In Love With A Song". On October 1, the group performed at the International Secret Agent Festival in Los Angeles, California alongside popular artist like Far East Movement, B.o.B, I.aM.mE, Sean Kingston, Jay Park, and David Choi. The group was in Singapore performing at various places and schools from October 11 to 16. From October 22 to 28, the group was in the Philippines for various promotions including their Penshoppe fan conference with Mario Maurer. They opened for The Black Eyed Peas for their Philippines leg of their concert on October 25, 2011. The group performed at various schools and clubs in Las Vegas and Los Angelos. The group finished their second part of their school tour in December at Palm Springs, La Quinta, and San Francisco of California.

On May 8, the group released the music video to their latest single "All Stars". On March 16, 18, and 20, Blush opened for Jessie J during her Malaysian, Singaporean, and Indonesian leg of her Heartbeat Tour. On May 25 and 27, Blush was the opening act, along with AJ Rafael, for the Verizon APAHM Tour 2012 in California where Jay Park headlined the tour. On June 5, they performed at the International Indian Film Awards festival held in Singapore. On June 22 to 24, they performed at the San Francisco Gay Pride Parade.