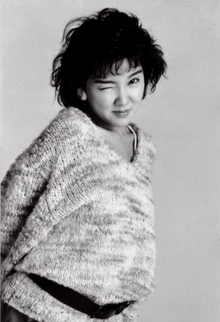 Chiwaki Mayumi (ちわきまゆみ) is a Japanese musician and radio personality.

At the age of 5, Mayumi watched the movie A Hard Day's Night, sparking an early obsession with the Beatles. Her favorite member was George. She received her first analog record, "BEATLES 65", for Christmas. She became infatuated with music and would go to local bookstores and look at the MUSIC LIFE magazines. As Mayumi got older, her music tastes changed. In high school she went to go see Aerosmith and KISS live in concert.

Mayumi went to Atomigakuen Women's University for college. In 1985 she debuted with her single "GOOD MORNING I LOVE YOU" under the label Toshiba EMI but soon transferred to east west japan. In 1988 she did a cover of the Fleetwood Mac song "Be My Angel".

Aside from her solo career, Mayumi is known for her involvement with the girl band Mean Machine as their guitarist. She has also filmed a movie entitled Kasei no Waga ya. She even does a radio show called "REAL-EYES 802".