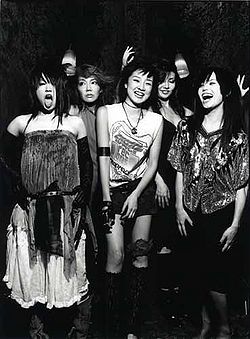 Mean Machine was an all girl rock group. When they debuted, the girls were experimenting, and learned to play new instruments. Although they were not very skilled, their music had a sloppy and gritty style. Each song was written by different members, giving each song a unique sound and meaning.

Mean Machine was the brain child of Chiwaki and Chara. In 1998 they started the band, saying they wanted to "play an instrument you never have before." They invited YUKARI to be the bassist, later YUKI joined to be the 2nd drummer. The last member was Ayumi. In the spring of 1999, the girls recorded two of their songs. The girls continued on their own schedules, putting Mean Machine on the back burner. It wasn't until 2000 that plans of a CD began to materialize. At the end of 2001, the band debuts, with the campaign "NO MUSIC, NO LIFE"

Although the band only released one album, they appeared in 2004 on the Japan For Sale Volume 4 compilation in the United States.