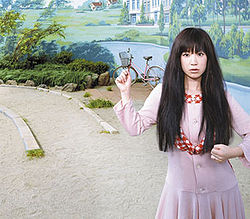 "Sentimental Journey" is the fifth single released by YUKI. The single reached #17 on the Oricon charts and stayed on the charts for a total of five weeks. The single sold a total of 24,000 copies. The music video for "Sentimental Journey" was directed by Noda Nagi. The video was shot while YUKI was pregnant with her first son. The video features a doppelgänger motif. The video took 90 girls who looked similar to YUKI and shot them in stop motion and the whole video was filmed in one continous shot. Because of the music video the Coco-Cola company asked Nagi to directed a commerical for them using the doppelgänger motif. The commercial featured the song "What Goes Around Comes Around" by Jack White. The video was later featured on BBC's "Japanorama" program.