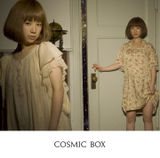 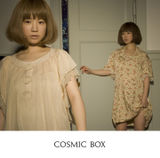 "COSMIC BOX" is the 19th single released by YUKI. The title track was used as the theme song for the movie Magare! Spoon. The B-side, "Message," is a solo Christmas song that was previously released as a digital single for a limited period in December 2008. The limited edition DVD contains the PV for "COSMIC BOX". This single reached #6 on the Oricon charts and charted for 6 weeks.