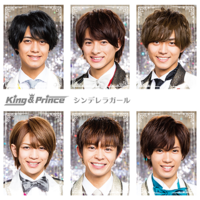 "Cinderella Girl" is the debut single released by King & Prince. It was released in three versions: two limited CD+DVD editions and a regular CD edition. The title track was used for the drama Hana Nochi Hare ~HanaDan Next Season~. The single peaked at #1 on the Oricon weekly singles chart and has charted for 25 weeks to-date. It sold 576,903 units in its first week, making it the second best sold debut single after KAT-TUN's "Real Face".