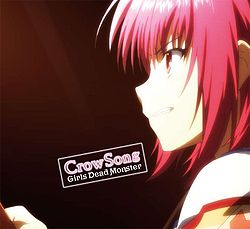 "Crow Song" is the debut single released by Girls Dead Monster. All songs from this single were used as insert songs for the anime Angel Beats!. The single reached #7 on the Oricon weekly charts, charted for 26 weeks, selling 81,090 copies, becoming the #84 single of the year. All songs were sung by marina.