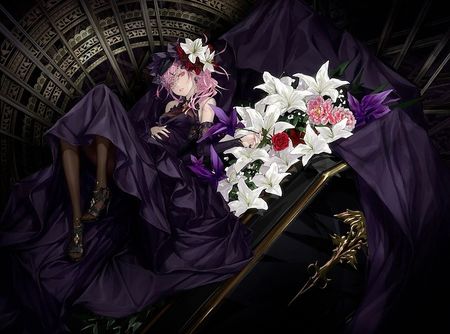 EGOIST promoting "Saigo no Hanabira (The meaning of love)" (2020)

EGOIST is a Japanese pop duo consisting of songwriter ryo of supercell and vocalist chelly. They were originally formed to create the theme music for the anime series GUILTY CROWN, however they continued to produce music after the series ended.

In 2011, ryo of supercell was asked to compose the theme music for the anime series GUILTY CROWN. That same year, supercell held auditions to find a vocalist for their third studio album. At the same time, ryo was looking for the someone to be the fictional vocalist of the band EGOIST featured in Guilty Crown. Out of approximately 2,000 candidates, then 17-year-old female singer chelly was chosen.

After the end of Guilty Crown, EGOIST continued producing music. Their third, fourth, and fifth singles were used as the anime Psycho-Pass' first, second, and second season's ending themes, respectively.

The songs included on their sixth single, "Reloaded", were used as the themes to three films based on Project Itoh works.