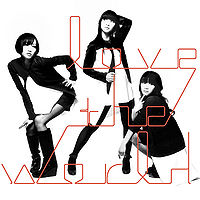 "edge" is a song released by Perfume and included on their single "love the world" as the B side track.