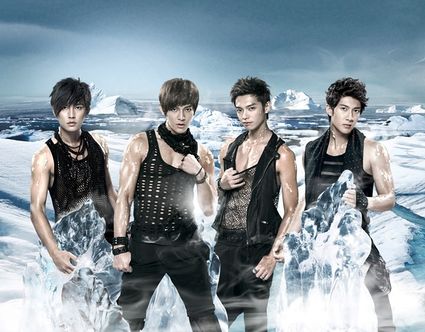 Fahrenheit (飞轮海 or 飛輪海) is a Taiwanese boyband consisting of four boys: Aaron Yan, Wu Chun, Calvin Chen, and Jiro Wang. They are managed by Jerry Fen's Comic Productions Co., Ltd. and records albums with HIM International Music. They are also managed by WOW Music in Hong Kong. Fahrenheit are often associated with their seniors, S.H.E, and are commonly referred to as the most successful Taiwanese boy band after F4. On June 20, 2011, HIM Records confirmed Wu Chun's withdrawal from the group.

Before their debut in 2006, the members of Fahrenheit were each involved in their own individual solo projects, such as starring in numerous dramas. Jiro Wang's most memorable solo work pre-debut would no doubt be featuring in the acclaimed Taiwanese drama, It Started with a Kiss. Other members like Wu Chun followed up with similar success of acting in dramas, with Tokyo Juliet. Coincidentally, both dramas were led by the same lead actress, Ariel Lin.

After releasing their self-titled album in September, they surpassed further expectations by becoming even more popular in Taiwan. They started starring in TV dramas as well as recording collaboration songs with other artists. Most notably, members Jiro Wang and Wu Chun starred in the Taiwanese drama adaptation (Hua Yang Shao Nian Shao Nu) of the Japanese manga, Hanazakarino Kimitachihe, which quickly became one of the top rated dramas for 2006-2007. Other members were also casted in TV dramas, and in 2007, it was announced that two Fahrenheit members will again star together in a drama, called Romantic Princess.

Due to their growing popularity in Japan, especially from the dramas they were featured in (e.g. Tokyo Juliet, It Started with a Kiss), it was announced mid-September 2007 that the group will release a Japanese album to be released November 21st of that year. A Japanese photobook will be released five days prior to it.