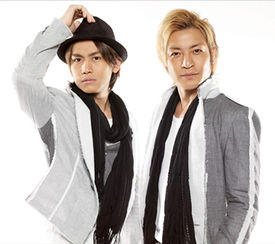 Friends (フレンズ) is a Japanese pop duo under the group Hexagon Family.

The duo was formed on June 2009 on the show Quiz! Hexagon II and released the single "Naitemo Ii Desu ka" a month later with the Hexagon All Stars. To promote the single, the group went on various television and radio shows including Tsuruno's own radio show, Tsuruno Takeshi no All Night Nippon. The song was also used as the theme song for the yearly charity television special FNS no Hi 26 Jikan Television that year. The group also became hosts of a segment on the variety show Waratte Iitomo. Then a few months later, the revealed a brand new song, entitled "Yume Senshi", on Hexagon's third hour special which was later featured on the compilation album We LOVE Hexagon 2009.

On March 2010, the group revealed another song, entitled "Dear Friends -Tomo e-", on a 4 1/2 hour special on Quiz! Hexagon II. But, they didn't release it as a single until four months later as a double A-side single with another Hexagon family group named Maikeru & Hanaka.