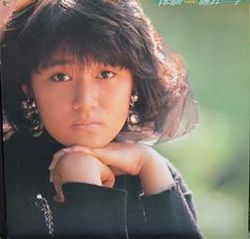 Fujii Ichiko (藤井一子) is a former Japanese pop idol singer, actress, and talento. Fujii got her start after she won an audition to appear alongside Nakayama Miho in the dorama Maido Osawagaseshimasu in 1985. A year later, she made her musical debut with the single "Check Point" under the label Tokuma Japan. "Check Point" was used as the theme song for the dorama Natsu Taiken Monogatari, which Fujii starred in as the lead character, and became a smash hit. However, in 1991, Fujii decided to retire from the world of show business. She then married a business man and currently has two kids back in her hometown.