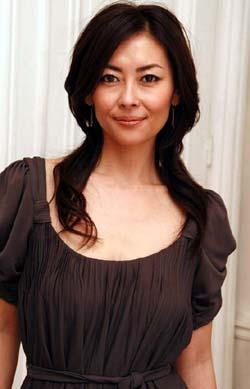 Nakayama Miho (中山美穂) is a Japanese actress and singer under the label King Records.

Nakayama Miho got her start in show business when she was scouted by a model agency, Box Corporation, when she was in her first year of middle school. Soon after, she began to model for commercials for TDK lens, cassettes, and the magazine Hana to Yume. Soon after, she switch agencies to Big Apple in order to start an idol career. She made her dorama debut in 1985 in the television dorama Maido Osawagaseshimasu and later appeared in various variety shows. In 1987, she got the nickname Miporin from her character on the dorama Mama wa Idol!.[1]

Later on in 1985, Nakayama made her singing debut with the single ""C"". The single sold extremely well that she won the Rookie of the Year award at that year's Nihon Record Taisho. She would win countless awards in the next decade from numerous award ceremonies from Japan Golden Disc Awards to the FNS Kayousai. Her single, "Witches", earned Nakayama her first appearance to the end of the year program Kouhaku Uta Gaseen and would appeared on the program seven times. By the end of the decade, many named Nakayama as one of the Four Queens of J-Pop in the 80s with Asaka Yui, Minamino Yoko, and Kudo Shizuka.[1]

By the start of the 90s, Nakayama shifted gears and tried the role of variety idol by appearing in commercials, doramas, variety shows, releasing music, and holding her concert tours. This didn't slow her down as she released the single "Sekaijuu no Dare Yori Kitto" with WANDS, becoming a major hit by selling over 1.8 million copies. A couple months later, Nakayama went to Los Angeles for a couple months for dance lessons and started to record albums there.

When she return to Japan in April 1993, Nakayama Miho started to work for the baseball team Yomiuri Giants. Soon after, she released another hit single, "Tada Nakitaku Naru no", that sold over a million copies. In 1995, Nakayama won various film awards, including Best Actress at the Nihon Academy Taisho, for her role in the film Love Letter.

In 1996, she collaborated with singer-songwriter Okamoto Mayo to release the single "Mirai e no Present". Three years later, she released the single "Adore" before taking a break from being a singer.

On June 2002, she married musician Tsuji Hitonari and postponed her film role for the movie Sayonara Itsuka. After her appearance in the television dorama Home & Away, Nakayama took a hiatus from show business and move to Paris, France, where she is residing today. But it didn't stop her from appearing in different commercials. She would later release a documentary film about her life, selling limit copies of the film's soundtrack in Starbucks stores.

In 2011, Nakayama released the song "I am with you (Tooku Hanaretete mo)" on Youtube as a support song for the victims of the Touhoku earthquake and tsunami.[1] 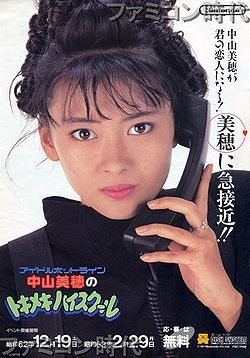 Nakayama Miho promoting a video game about herself (1980s)