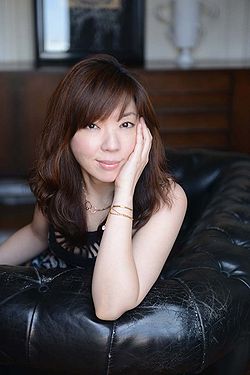 Okamoto Mayo (岡本真夜) is a Japanese pop singer-songwriter, who is currently signed under the Nihon Crown record label, and former member of the duo Love Cupids. She made her debut in 1995 under the Tokuma label, but left the label in 2003. After a two year absence from the scene she returned in 2005 and during which she did a short stint signed to avex trax.

Okamoto Mayo was born in Shimanto in 1974. When she was young, her parents divorced and Okamoto went to live with her grandparents as their adopted daughter. Because of this, Okamoto was bullied throughout elementary school a lot. But it didn't stop her as she formed the comedy group Trio Beagle 38 with her high school classmates and went to Tokyo. There, Okamoto also wanted to go to Tokyo to become an artist even if here grandfather opposed the idea. Okamoto went to Tokyo and tried to learn various instruments while handling a part-time job.

Okamoto finally got her chance when she debuted in May 1995 with the single "TOMORROW". The single was so successful that she was invited to perform on the annual Kouhaku Uta Gassen. It also became the 21st best selling single in Japan. Aside from here solo work, Okamoto is well known for writing lyrics for other artists such as Nakayama Miho and Yonekura Chihiro. She would later announced at her concert that she had recently got married and later in November that year she gave birth to a boy in January 2000.

In 2010, Okamoto was put back into the spotlight after the song "Right Here Waiting for You 2010", used as the theme for Expo 2010, was plagiarized from Okamoto's song "Sono Mama no Kimi de Ite". Okamoto's agency later released a statement stating that the Expo did request permission to use the song and the agency agreed.