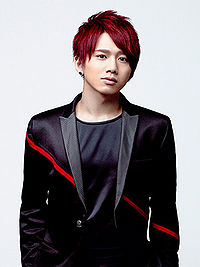 Hanamura Sota (花村想太) is a Japanese singer. He is a vocal & performer member of the group Da-iCE.