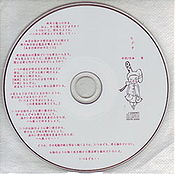 "Hinata" is the eighth other/distributed single released by Ayabie. It was available through two ways: one way was buying it through Visunavi, and the other was attending the June 15th, 2005 live at Sapporo KRAPS HALL for Ayabie and Alice Nine's first stop on their country-wide coupling tour "A2V2 ~Zenkoku Sugoroku Angya~". "Taikanshiki Zenya" was also released on this date. Ayabie re-recorded this for their second full-length album "Virgin Snow Color". This is a limited release having only 1,000 copies.