I Want You Back (Secret) 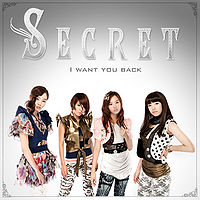 Artist
Secret
Single
I WANT YOU BACK
Released
2009.10.13
Tracklist

"I WANT YOU BACK" is Secret's debut digital single. An acoustic version was included in their debut mini-album Secret Time as track #5.

There are currently two versions of "I WANT YOU BACK" to be found in Secret's discography. These are:

I WANT YOU BACK (Acoustic Version)
Found on Secret's debut mini-album, Secret Time as track #5.