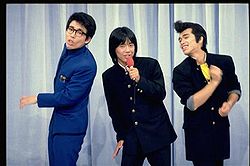 In 1981, the regulars of the Fuji Terebi program Kin Don! Yoiko Waruiko Futsuu no Ko(欽ドン!良い子悪い子普通の子), Yoshio (Yamaguchi), Waruo (Nishiyama) and Futsuo (Nagae) were put together and formed Imokin Trio, a comic song unit. The name finds its origins in the then popular Tanokin Trio and YMO (=Imo) as well as Hagimoto Kinichi.

Their debut song High School Lullaby was penned by Matsumoto Takashi who had recently gotten a break by writing the lyrics for artists such as Matsuda Seiko and Kondo Masahiko. Riding the technopop wave, the single easily sold a million copies. They were so successful that they were ranked number 1 on The Best Ten ranking for 8 consecutive weeks. During live performances of the song and in imitation of YMO, they played air keyboard and air drums. The single ended up being the 4th best seller of the year on the Oricon charts. They went on to release 3 singles, all technopop songs, and an album.

In 1982, Nagae Kenji sat university examinations and had to withdraw from group activities. A new member was recruited: Gotou Tadashi who became the 2nd generation Futsuo (he quickly withdrew from the public eye). However, the end of the program that had brought about the group also meant the end of the group's activities. Nowadays, the 3 original members sometimes get together as the group.