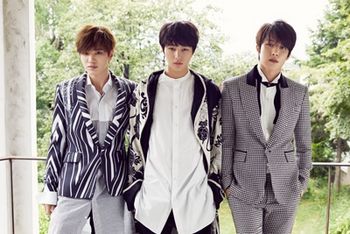 INFINITE F (인피니트F) is a sub-unit from the Korean pop boy group Infinite featuring members Sung Yeol, L, and Sung Jong. The sub-unit was first formed for the main group's ONE GREAT STEP RETURNS encore concert in February of 2014 and their debut track, "Michigesseo" was featured on the group's second full-length album Season 2.