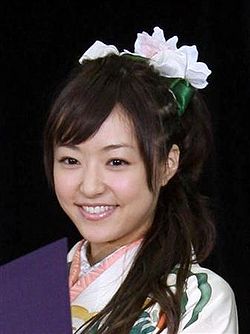 Inoue Mao is a Japanese actress and former U-15 idol.

Inoue Mao was a popular U-15 idol from 1999; she was well known for her role as Imai Akane in the dorama Kids War. Before that, she had had parts in several other dramas from the age of five, but it wasn't until the debut of Kids War in 1999 that Japanese audiences took notice of Inoue. In 2005, she was cast as the star of Hana Yori Dango on TBS. Inoue played Makino Tsukushi in the live-action adaptation of the manga and anime, a lower middle-class girl who is trying to survive unnoticed in an elite high school full of playboys and rich snobs. A sequel to the 2005 drama, Hana Yori Dango 2, was aired in the winter 2007 season.

After the success of the two Hana Yori Dango dramas, a film was announced in August 2007, just months after the end of the 2007 sequel. It will be Inoue's first starring role in a movie, which is to be called Hana Yori Dango Final. Filming is to start January 2008.