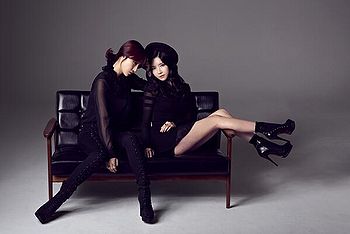 JEVICE (주비스) is a Korean pop ballad female duo that debuted in 2012 under DreamT Entertainment. The duo is formed by former T-ara member Ji Ae (now known as Hana), and solo singer Iahsi (now known as Juri). The group's name is a portmanteau from the words "Jewelry" and "Voice", meaning that their voice is pure and sparkling. As of late 2014, the duo has not been active, and their information has been removed from the DreamT Entertainment website, concluding that they disbanded.