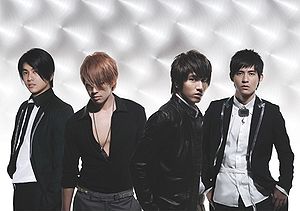 JVKV (also known as F4) is a boy band from Taiwan. They became famous for playing the role of F4 in the Taiwanese live-action TV version of the manga Hana Yori Dango, entitled Meteor Garden.

The band got their name after playing the role of F4, a group of notorious boys from Kamio Yoko's manga Hana Yori Dango. Meteor Garden, the Taiwanese adaptation of the said manga, made the four very famous when it hit the TV waves in 2001. Sony Taiwan took notice of this and launched them officially as a band.

In April 2007, the group changed its name to JVKV. It's the initials of their name, ordered by age: Jerry, Vanness, Ken and Vic. However, they are still referred and release under the name F4.