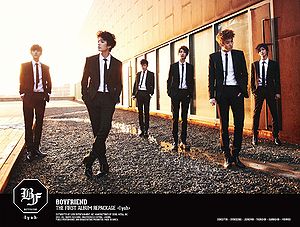 Janus is the first Korean album released by BOYFRIEND. It was released six editions, housed in a sleeve case, each one featuring a different (random) member on the cover art. Two months later the album was re-released as a repackage album titled I yah, including a 100-page photobook and a randomly selected member photo card. Both title tracks were used as lead singles.