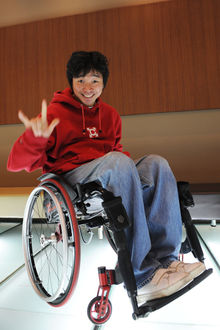 Kang Won Rae (강원래) is a Korean Pop singer. He was a member of the disbanded dance duo Clon.

In 2000, Kang took some time off because a tragic motorcycle accident left him paralyzed from the waist down. Won Rae & Koo Jun Yup made a comeback in 2005, after being 5 years in hiatus, with their Victory album and their popular "Wheel Chair" dance.

After the disbandment of Clon, he has been selected numerous times as ambassador of different associations for persons with disabilities.