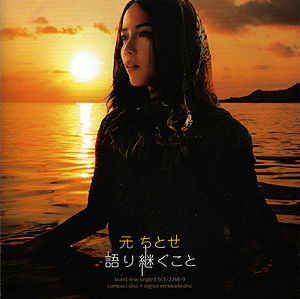 "Kataritsugu Koto" is the sixth single released by Hajime Chitose. It was released after Hajime's hiatus in starting in 2003, after the release of her fourth album Nomad・Soul. This was released in two different versions (and is her first single to be): a limited CD+DVD edition and a regular CD only edition. The limited edition comes with a DVD of a special PV for the title song, set to the closing animation of BLOOD+. Includes a cover of the The Beatles 1968 song "Happiness Is a Warm Gun" from the album The Beatles. The title song was used as an ending theme song for the MBS/TBS anime BLOOD+. The single reached #12 on the Oricon charts, where it charted for 10 weeks and sold 43,000 copies.