L⇔R started in 1990 when Kurosawa Kenichi submitted a demo tape to an acquaintance, music producer Okai Daiji. Okai liked what he heard and introduced Kurosawa to Polydor Records executive producer at the time, [[Masamura Kenichi00,. Masamura signed the band to Polydor soon after.

Kurosawa's younger brother Kurosawa Hideki and bassist Kinoshita Hiroharu were added to the band in 1991. L⇔R released their debut mini-album. entitled L, on November 25, 1991. While recording for their first album, keyboardist Minekawa Takako joined the band in 1992. The band opened their first fanclub named SCRUFFS in 1993. That same year, they won the first Hattori Ryouichi Music Award.

L⇔R changed labels to Pony Canyon in 1994. However, due to the change of labels, Minekawa left the band shortly after. The single "REMEMBER" was the first to be released as a three-member band under the Pony Canyon label. But, the change of labels proven to help the band's popularity. Their next single, "HELLO, IT'S ME", was a smash hit. The follow-up single, "KNOCKIN' ON YOUR DOOR", was also a smash hit as it was the band's first and only single to reach #1 on the weekly Oricon charts.

The band went onto perform their first live in 1996. However, the band decided to break up two years later at the end of their "CONCERT TOUR '97 "Doubt" tour. The reason why the band broke up was because each member wanted to pursue a solo career.

L⇔R briefly reunited on the show Ichiban Song SHOW on May 2013. 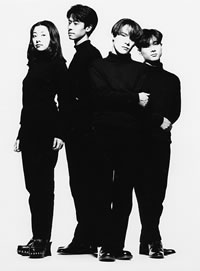