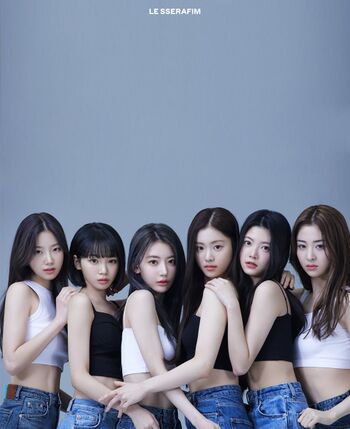 On March 14, 2022, Source Music announced that they would launch a new girl group, with Sakura and Kim Chaewon set to be the first members of the group. On March 21st, HYBE confirmed the group would officially debut in May. The members were revealed through "The First Moment of LE SSERAFIM" teasers from April 4th to April 9th. On April 13th, Source Music announced that LE SSERAFIM would release their debut mini-album, FEARLESS, on May 2, 2022. Pre-orders for the mini-album surpassed 270,000 copies in seven days, and 380,000 copies in sixteen days.

On the day of its release, the mini-album sold more than 175,000 copies. As of May 6th, the mini-album surpassed aespa's Savage to have the highest first week debut album sales by a K-pop girl group on Hanteo of all time. The group surpassed 1.8 million monthly listeners on Spotify in only 11 days after their debut and surpassed 3 million in 15 days making them the fastest K-Pop group to achieve the feats.