Miura Rieko (三浦理恵子) is a Japanese pop singer, actress, seiyuu, and was also a member of the idol group CoCo and the one-shot group Mini Sukapan.

In 1989, Miura Rieko joined as a second generation member of the Fuji TV television program Paradise GoGo!'s girl group Otomejyuku. Later that year, she became a member of the idol group CoCo. She ater started her solo career with the single "Namida no Tsubomi-tachi" on February 1991.

After CoCo disbanded in 1994, Miura continued her solo career as well began her acting career. She got married in 1998 to former Red Warriors vocalist Tadokoro Yutaka. But, the two later divorce in 2001. 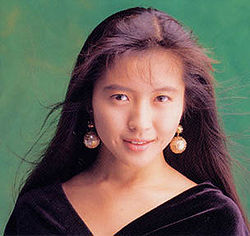