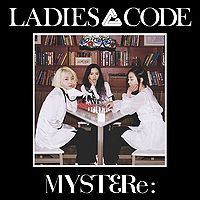 "MYST3RY" is LADIES' CODE's second single. It was the first release without members EunB & Rise who passed away in a car accident. The song "Galaxy" was used as the lead track.

A remix version of the single titled "MYST3Re:" was released a month later on March 30. "Chaconne (Arieta Mix)" was used as the lead track for this new version.