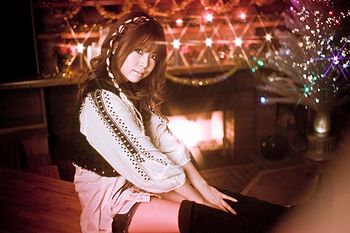 Nagase Miyu (長瀬実夕) is a Japanese pop artist and former lead singer and guitarist with the band ZONE.

Nagase has loved singing since she was a small child. By the time she entered the third grade she knew that she wanted to become a singer, and was soon enrolled in the child performing arts school Studio RunTime.

In 1997, she entered an audition to become a member of the Japanese pop group ZONE. She made it all the way to the final round, and became one of the four members. In 1998, the band made their indie debut with the single "believe in love".

It wasn't until the band's fourth single, "secret base ~Kimi ga Kureta Mono~", that the band struck gold. Over the next five years the band had a string of hits and all became well known artists. During Nagase's time with ZONE, she became an accomplished singer and learned how to play the guitar. She even started writing lyrics; she wrote the lyrics to the band's final single "Egao Biyori". ZONE disbanded on April 1, 2005, and Nagase took a one year hiatus.

While still in ZONE, Nagase released to solo singles "Just 4 your Luv" and "snowy love" as part of a special project with Sony. Unlike her releases with ZONE, the songs had more of urban styled pop sound.

In October of the same year, Nagase made her official solo debut on CAM ENTERTAINMENT with the single "Key ~Yume Kara Samete~". The single debuted in the Oricon top 10.