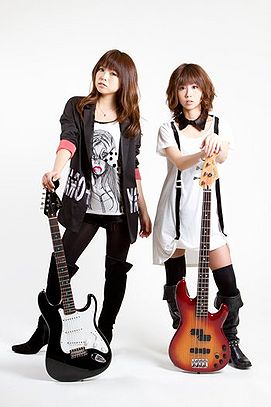 ZONE (ゾーン) was a four member Japanese pop/rock band formed by Sapporo based performing arts school Studio Runtime. In December 1999 the band released an indie single before later signing to Sony. ZONE won a 'best new artist' award in 2002 following the success of their third Sony single "secret base ~Kimi ga Kureta Mono~". At the end of 2003, Okoshi Takayo graduated from ZONE and was replaced by Nishimura Tomoka, one of the original group of performing arts students from whom the band had been formed. ZONE disbanded in April 2005.

Six years later in 2011 Sakae Maiko, Nagase Miyu and Nishimura Tomoka announced two ZONE reunion concerts to be held in Tokyo during August. A recording of these concerts was subsequently released on DVD/BD. In 2012 ZONE, now a two-piece band without Nishimura, released a single "treasure of the heart ~Kimi to Boku no Kiseki~" and made a national tour of Japan. A second disbandment was announced in Februray 2013.

It all started out in 1999 when Studio Runtime ran auditions to form a new type a group, a bandol. The word bandol being a combination of the words band and idol. The all the group would have to sing, dance, and play an instrument. The bands name refers to their initial goal, starting out at the bottom (Z, the last letter of the alphabet) and going all the way to number one (ONE).

Initially ZONE started off with eight members in 1997, then was reduced down to five members and finally four. In 1999 the group released their first single, "believe in love" on the indie label Knockers Records. The single featured a normal pop idol sound, and only featured the girls singing and dancing. Though the single failed to chart on the Oricon charts, it did well on the indie charts.

Over the next year the girls were all given an instrument and trained on them. The bands re-emerged in 2001 with their second single, "GOOD DAYS". The single marked their major label debut under Sony Music Entertainment.

The bands breakthrough hit came as their fourth single, "secret base ~Kimi ga Kureta Mono~". The song was about sad goodbye to a good friend. The song was an instant hit reaching #2 on the Oricon and selling 744,000 copies. After another single the group released their debut album, Z" just a year after their major label debut. On the same day ZONE also released their sixth single, "Yume no Kakera...".

The bands next two singles share similar success. "Hitoshizuku" (which was used as the theme to the Japanese release of Ice Age) and "Akashi" reached #3 and sold over 100,000 copies. The band then assembled their second album, O. The album was release less then nine months after their debut album.

Much like with with their first album the band released a single ("Shiroi Hana") on the same day of their second albums release. The bands next two singles ("true blue / Renren..." and "H・A・N・A・B・I ~Kimi ga Ita Natsu~") both reached #3 on the Oricon. "true blue" was used as the ending theme to the Astro Boy anime. The single sold well, and became the groups best selling since "secert base ~Kimi ga Kureta Mono~". Because of this ZONE even collaborated with the Run Time All Stars to create an Astro Boy themed album.

TAKAYO then announced that she would be leaving the group to further pursue her studies. Her last single with the group was "Boku no Tegami". The single reached #2, and TAKAYO then gracefully graduated from the group.

After a four month absence the band returned in early 2004 with their new guitarist, Nishimura Tomoka. TOMOKA was one of the original six girls in the group before the cut-down. The first single featuring TOMOKA was "Sotsugyou". The band released three more singles, each of which started selling less and ranking lower than one another.

In February of 2005 it was announced that ZONE would be disbanding at the end of their Spring Tour. It was initially MIZUHO's idea to leave, however, they did not want to replace her and didn't want to continue the band on as a three piece band.

On April 1st ZONE played their final live concert at Nippon Budokan. It was then on April 1, 2005 that they disbanded. The last song they played at the concert was their initial hit, "secret base ~Kimi ga Kureta Mono~".

The band has been given an homage in the anime Suzumiya Haruhi no Yuuutsu by featuring a band named ENOZ (ZONE reversed).