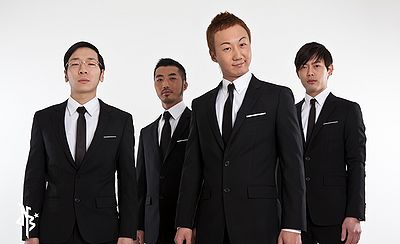 No Brain (노브레인) is a Korean punk rock band that first began performing in 1996. Originally part of Korea's homegrown underground punk movement, known as Chosun punk (조선펑크), in recent years the group has enjoyed mainstream success both with their music and their emerging acting and hosting careers.

In October of 1996, No Brain first formed, and the band began playing in the Hongdae area of Seoul. The following year, the group released their first album, Our Nation Volume 2, a split album with the group Weeper. The band recorded a video for the song "Badasanai" off of this album. In addition, they contributed a cover of "Lithium" to the Nirvana tribute album Smells Like Nirvana and several tracks to the Korean punk compilation Here We Stand.

In 1999, the group released a single called, "Cheongchungushippal." A music video was created for this song, and the group ended up receiving an award at the 1999 M-Net Music Video Awards show in the indie category.

In 2000, bassist Jeong Jae Hwan left the group in order to carry out his mandatory military service, but the group pressed on without him, releasing their first full length album, cheongnyeonpokdomaengjinga. The album spawned singles for which music videos were produced, the title track and "Seongnanjeormeum". In 2000 the group was again nominated in the indie category at the M-Net Music Video Awards show. The same year the band dubbed itself the anti-Seo Taiji band and held a live event to commemorate the occasion.

The band released the mini-album Cheongchungusippal Remaster and contributed a track to the Red Devil 2002 World Cup album in 2002. The band also embarked on a national club tour in Korea and a tour of Japan. That same year, Cha Seung Woo left the group.

The group recruited Jeong Min Jun, formerly of the bands Real Sshang Noms and Samchung, and recorded the album Annyeong, Mary Poppins which was released in June of 2003. To promote the album the group appeared on numerous television music programs.

In December of 2004 the group released a mini-album titled, Stand Up Again!. November of 2005 saw the band release their fourth full length album, Boys, Be Ambitious. The members of the band recorded the theme song for the KBS television program, "FC Shootdoli".

In 2006, No brain once again recorded a song to commemorate the World Cup, and they released the single "Sorichyeora, Daehanminguk!" in May. In the fall of 2006, the group appeared in the film Radio Star, portraying a garage band named East River.