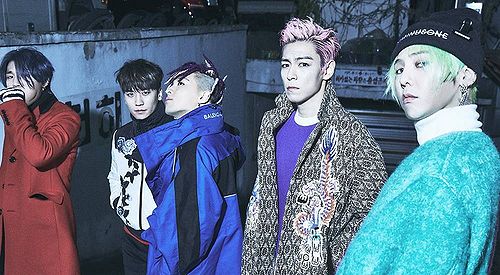 BIGBANG (빅뱅) is a 5-member Korean pop/hip-hop/R&B male group that debuted in 2006. In 2008, the group also debuted in Japan with the mini-album For The World. They are currently under YG Entertainment in Korea, and YGEX in Japan. 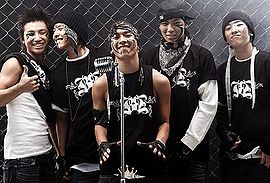 BIGBANG's members were first introduced to the public through a 10 episode documentary that ran from July 15 to August 13, 2006. The show documented Yang Hyun Suk's decision to cut what started as 6 members to a 5 member group; though, he originally intended to cut 2 members. Seungri was admitted in a last chance while Jang Hyun Seung (now member of BEAST) was cut out.
The group was finally formed by 2 newcomers, Daesung and Seungri, a well known underground rapper, T.O.P (formerly known as Tempo), and G-Dragon and Taeyang, both of whom have done several collaborations with other YG Entertainment artists prior to debuting as part of BIGBANG.

BIGBANG, still as a 6 member group, made his public debut in the "YG Family 10th Anniversary World Tour 2006" concert held on August 19, 2006. Just 10 days after this concert, BIGBANG, now as a 5 member group, made his official debut with the self-titled single "BIGBANG". The single sold nearly 40.000 copies. One month later they released their second single "BIGBANG IS V.I.P" which sold 32.000 copies. Their third, and last until the date, Korean single was released two months later than the second one; "B I G B A N G 03" sold nearly 30.000 copies.

At this time, an official fanclub was created, V.I.P. In December of 2006, BIGBANG releasesd his first full album, SINCE 2007, which sold 48,000 copies by the end of February 2007. In this same month the group held their first live concert, "The Real" (released on the First Live Concert: The Real LIVE Concert DVD).

From May to July 2007, the group held their first national tour in five cities: Incheon, Daegu, Changwon, Jeonju and Busan.

In the middle of 2007, their first mini-album, Always, was released. This time G-Dragon composed and produced some songs of the album, like the song "Keojitmal". "Keotjimal" became a hit reaching number one on the principal music TV-shows and online charts for many weeks.
Their second mini album, Hot Issue, was released only two months after Always and, as what happened with Always, their second mini-album also contain a big hit. The song was "Majimak Insa". Their new hit, got as much success as "Keojitmal". At the end of the year BIGBANG received many awards, including "Best Male Group", "Song Of The Year" and "Music Arrangement" at the M.NET Music Festival. 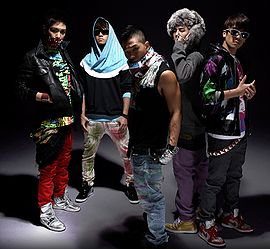 BIGBANG promoting the Stand Up Tour (2008)

In 2008 after gaining success in Korea, BIGBANG started their Japanese promotions and releases. In January, the mini-abum For The World was released. For The World was a collection of English versions of their Korean hits. The mini-album debuted at #14 on Oricon, and managed to reach #10. In March, the group held his first Japanese concert at the JCB Hall. Two months later, in May, they release their second Japanese mini-album With U. As their first Japanese mini-album, With U contained English versions of their Korean songs, but this time they included their first song in Japanese, "My Girl".

The group returned to Korea in the summer of 2008, for the release of a new mini-album Stand Up. The mini-album sold over 100.000 copies and contained the hit song "Haru Haru" which managed to archive as much success as BIGBANG's latest hits, "Keojitmal" and "Majimak Insa".
A couple of months later, BIGBANG releases his first full Japanese album Number 1, which reached #3 on the Oricon daily charts. A month later, their second Korean album, Remember, was released including the hit song "Byulkeun Noeul".

As the previous year, BIGBANG received numerous awards by the end of the year, including the M.NET Music Festival Awards "Best Male Group", for the second time in a row, "Digital Music Award", "Musical Portal MNet Award" and "Artist of the Year". 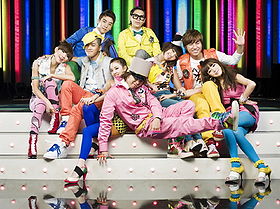 BIGBANG start 2009 with their first collaboration single, "Lollipop". This single was the debut for the girl group 2NE1, which was described by YG as the "Female BIGBANG". It was released digitally and although the song was only released for the promotion of a cell phone, it gained much popularity.

In the summer of 2009, BIGBANG releases his first Japanese single "MY HEAVEN" which was a Japanese version of the original Korean song "Heaven" (천국). The single reached the #3 in the Oricon weekly charts, what made BIGBANG's better charting since their Japanese debut.
Following their release pattern with their Korean singles, just a month later they released their second Japanese single "Gara Gara GO!!". With this song the group managed to perform for the first time in the most popular Japanese music shows as Music Station or HEY! HEY! HEY! MUSIC CHAMP.

In August 19, they released their second Japanese album, BIGBANG, and although they almost didn't promote it, it reached the #3 in the Oricon weekly charts. Just after the release of the album, BIGBANG returned to Korea for G-Dragon's and Taeyang's solo activities. In October 15, BIGBANG returned with their third Japanese single, "Koe wo Kikasete" and for the first time, one of their songs was released with a tie-in. The title track was used as theme song for the dorama Ohitorisama starring Mizuki Alisa and Koike Teppei.

In December, 2009, the group wins two of the most prestigious music awards in Japan, the "42nd Nihon Yusen Taisho" and the "51st Japan Record Awards", as Best Newcomers.

2009 ended with two announcements. First YG announced a new concert, BIG SHOW 2010, in January 29, 30 and 31, and a new album for the Summer of 2010. Second announcement was made by the Ministry of Culture, Sports and Tourism of Korea selecting BIGBANG (along with Wonder Girls) as the Artists of the Year for the 2009 Korea Content Award because their contributions overseas.

In January 2010 BIGBANG (along with Dong Bang Shin Ki) received the "Cultural Ambassadors" award by the Korea Foundation for International Culture Exchange (KOFICE), as form of recognition for "The contributions they have made in the development of the cultural aspect through popular music". 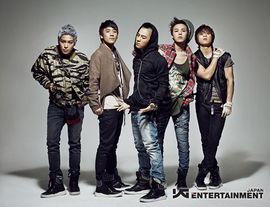 On February 24, BIGBANG was awarded at the "24th Japan Gold Disc Award" as one of the 5 best domestic artists. They were awarded along with Hilcrhyme (who won the "New Artist of the Year" award), Mano Erina, JASMINE and supercell.
Three months later, on May 29, the group also received the "Best Pop Video" award (for "Koe wo Kikasete") and "Best New Artist Video" award (for "Gara Gara GO!!") at the MTV Video Music Awards Japan. Additionally G-Dragon received along with w-inds. the "Best Collaboration Video" award for the collaboration song "Rain Is Fallin'".

BIGBANG's fourth Japanese single was released on June 9, 2010. The title track "Tell Me Goodbye" was used as opening theme for the Japanese broadcast of the Korean dorama IRIS, making this their second theme song for the dorama, as their Korean digital single "Hallelujah" was also used as theme song for the original Korean broadcast.

On November 29, 2010, it was announced, by YG Entertainment blog, BIGBANG's Korean comeback for February 1, 2011, however that date was later delayed. On the same day it was also announced Seungri's solo debut mini-album, and G-Dragon and T.O.P (GD&TOP) joint album release. 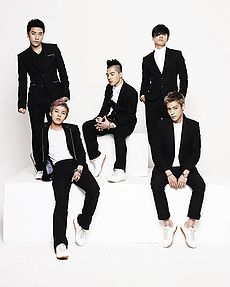 On February 2011, it was once again announced BIGBANG's Korean comeback. This time it was also announced that they will make their comeback with their fourth mini-album, set to release on February 24. A few days before the new announcement, BIGBANG members were spotted in Las Vegas, USA, filming a new videoclip, which was later revealed to be the music video for "Tonight", the mini-album's lead track. The mini-album, just titled BIGBANG 4th Mini-Album, included three new songs (+ an introduction track), and two Korean versions of songs previously released in Japan. Although digital singles and live albums/DVDs were released by the group since 2008, this would be the first time in more than two years that they would actively promote a release in Korea.

Two months after BIGBANG 4th Mini-Album' release, the group released the repackage album BIGBANG Special Edition for which the songs "Love Song" and "Stupid Liar" were used as lead tracks.

In July 2011, YG Entertainment and avex announced a joint-venture in the form of a new sub-label, YGEX, effectively moving BIGBANG to avex from their former label, Universal Music; their final release under Universal Music, THE BEST OF BIGBANG, was released in mid-December of 2011.

On November 6, 2011, BIGBANG won the "Best Worldwide Act" award at the MTV Europe Music Awards, against Britney Spears and EXILE, among other international artists, becoming the first Korean artists to win the award.

The group's first release of 2012 was their fifth Korean mini-album ALIVE, which was released on February 29. Three songs were chosen as lead tracks for it, "BLUE", "FANTASTIC BABY" and "BAD BOY", featuring promotional music videos filmed in New York. The album's release was followed by their annual "BIG SHOW" concert, which marked the start of their first world tour Alive Galaxy Tour 2012, which allow them to visit 13 countries (Korea, Japan, China, Singapore, Thailand, Indonesia, Taiwan, Philippines, Malaysia, United States, Peru, Hong Kong and England), 21 cities in 48 dates. The tour started on March 2, 2012 and ended in January 27, 2013.

A Japanese version of ALIVE was released in March 28 as their fourth Japanese studio album. The Japanese album included both Japanese and Korean tracks, and also two new songs. Korean versions of these two new songs, plus another 3 new Korean tracks were included on ALIVE's repackage mini-album, titled STILL ALIVE. The song "MONSTER" was used as lead track for the repackaged mini-album.

G-Dragon confirmed that BIGBANG was going to start their second world tour in April. He also confirmed BIGBANG was working on their new album with a comeback planned for the first half of 2015. 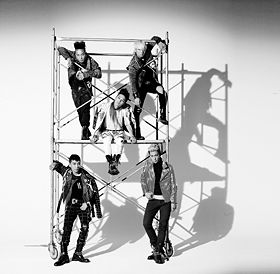 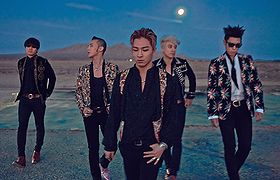