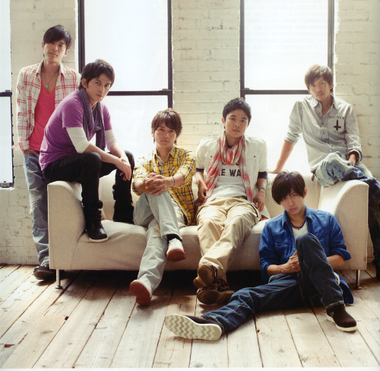 V6 was a six member Japanese pop group belonging to Johnny & Associates and signed to avex trax label. Debuting in 1995, the group has released over 40 singles and 13 albums. Originally a group with a Eurobeat sound, they have progressed into different genres since their debut single "MUSIC FOR THE PEOPLE". They officially disbanded on November 2021.

Due to their age differences, the six members of V6 were divided up into two subgroups, 20th Century and Coming Century. The group was formed in September 1995 to record the theme song for that year's Volleyball World Cup Relay. Their debut was announced at Roppongi's Velfarre disco and they were quickly picked up by avex trax, a move that would influence the Eurobeat sound they begun with. Their debut single "MUSIC FOR THE PEOPLE" debuted at #3 on the Oricon charts. At the time this was considered a impressive position for a newly established group.

In 1997, to raise money for the Great Hanshin Earthquake of 1995, V6 was put into the special unit J-FRIENDS with Kinki Kids and TOKIO. The unit proved to be extremely successful, holding concerts in the prestigous Tokyo Dome.

The group began to expand into Asia in the early 2000s, holding a concert in Taiwan. In 2002, they recorded the song "one" with Shoo of successful Korean pop group S.E.S. In spite of being the first Japanese group to cross over since the ban on Japanese media was lifted in 1998, the group was welcomed into the country with open arms, even being invited to perform at the 2002 Dream Concert. Their Korean fanclub VOICE OF V6 was formed 3 years later.

2005 marked the group's 10th anniversary. They opened up a temporary museum in Shibuya to celebrate and a display at Tower Records. A nationwide handshake event was held, a rare occurrence for Johnny's groups. A year later it was announced that V6's concerts had mobilized at least five million people since their debut.

In 2008, the group held their LIVE TOUR 2008 VIBES concert. For the first time the concept of the tour was left to the members. Okada Junichi was given the opportunity to lead set design and Morita Go was in charge of costume design.

In the fall of 2009, V6 embarked on an Asia Tour, their first in seven years after splitting up into their subgroups months prior to hold nationwide tours. They were also invited to the 2009 Asia Song Festival in Seoul where they received an award. After performing in Taipei and Seoul to crowds of overjoyed fans, they returned to Japan.

Only a months later in February of 2010 gossip tabloid Shukan Bunshun brought news of disbandment, stating that the members wished to head their separate ways. A few days later their agency declared that it was baseless. Member Miyake Ken stated that disbandment was "impossible", and in April V6 kicked off a nationwide tour to celebrate their 15th anniversary. That same year another rumor sparked that the group would finally get to perform at the distinguished Kouhaku Uta Gassen new year show but these rumors were debunked.

In 2011, they kicked off their "V6 Sexy.Honey.Bunny!" tour, with it set to end at Yokohama Arena, a venue the group frequented in their early years. Only a few days later they released their single "Sexy.Honey.Bunny! / Takara no Ishi". For "Sexy.Honey.Bunny!" V6 strayed from their usually complicated choreography and went for moves that could be done in karaoke. Despite both song and PV presenting V6 in a revamped image fans were unfamiliar with, it sold 63,594 copies in its first week thus breaking a streak of decreasing single sales. The PV had also been receiving heavy rotation on popular radio stations and music programs all over the country.

On March 12, 2021, it was announced that the group would be disbanding on November 1, 2021 with Morita to leave Johnny & Associates in Autumn. 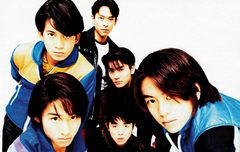 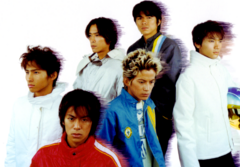 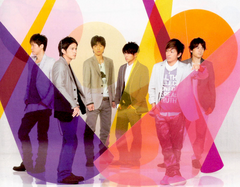 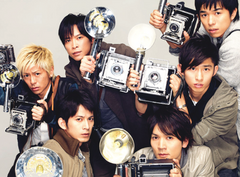