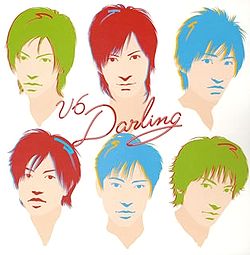 Darling is V6's 23rd single. Darling was used as the theme song for the dorama Kimi wa Pet and insert song for the movie Hard Luck Hero, starring all V6 members. It was released in five versions: four limited editions, each with different bonuses and colour jacket (yellow, red, blue and green) and a regular edition. This single reached #1 on the Oricon charts and sold 205,905 copies in 2003, becoming the #38 single of the year. It charted for 13 weeks and sold a total of 206,418 copies.