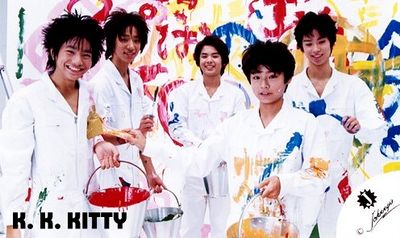 In 2001, Domoto Koichi of Kinki Kids began producing a junior unit called J-Support. The unit was meant to backdance for Kinki Kids in concerts and Domoto Koichi also wrote a song for the unit call Private Hearts. Later the name was changed to K.K.Kity which comes from the member's initials. (Koyama Keiichiro, Kato Shigeaki, Kusano Hironori, Iida Kyohei, Takeuchi Kotaro, Yokoo Wataru). The unit was split in two, the singing trio K.K.K. and the roller/dance trio I.T.Y. K.K.K. of the unit often appeared on Ya-Ya-yah's variety show as hosts, and also on Shounen Club.

In 2003, the unit was split with Koyama, Kato and Kusano being chosen as members of the new unit called NEWS. For the duration of the year, K.K.Kity did perform together in Shounen Club, but the unit was officially disbanded in 2004, when news of NEWS' debut was announced. The remaining members continued as ITY for two months and were later integrated into Junior Boys. In March 2004, Iida and Yokoo were chosen as members of the new junior unit Kis-My-Ft and stayed with the unit after the member and name change in 2005. Takeuchi, on the other hand, stayed with Junior Boys until September of 2005 where he became a member of the junior dance unit M.A.D.