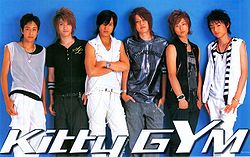 Kitty GYM was a temporary unit formed to promote Volleyball.

NEWS got suspended and so they need a new group to support the volley ball match. Yamashita Tomohisa, who was the leader of NEWS, was taken for this group and put together with the Thai duo, Golf & Mike, becoming GYM. In graphics, however, the Y is much larger than the G and M, showing the true focus of the group. Together they released a single on August 30th, 2006.

For the work as supporters this group was added with some juniors from different groups, wich became the Kitty. As supporter Kitty also sing, but mainly they back up GYM.