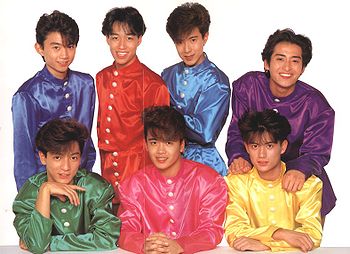 Hikaru GENJI (光GENJI) was a Japanese pop group under the Johnny's Entertainment label that was active from 1987 to 1995. In 1994, Oosawa Mikio and Sato Hiroyuki left the group and the remaining members formed HIKARU GENJI SUPER 5 which disbanded in 1995. Today, only two of the original members remain in Johnny's Entertainment: Uchiumi Kouji and Sato Atsuhiro.

Hikaru GENJI was formed on June 25, 1987 using members from two existing groups, GENJI and Eagles. In August of the same year, they released their first single, STAR LIGHT, which debuted at #1. What separated them from other groups at the time was the fact that they performed on roller skates. Many members of now popular groups (SMAP, TOKIO) started off as their back dancers.

Hikaru GENJI went on to release 29 singles and 20 albums until, in 1994, Oosawa Mikio and Satou Hiroyuki left the group and the company. The remaining members then became HIKARU GENJI SUPER 5 and went on to release 3 singles and 1 album before disbanding on September 3, 1995 at the Nagoya Rainbow Hall on the last date of their tour. Morohoshi Kazumi left the company very quickly after that to go solo. In February 2002, Yamamoto Junichi also left the company. On October 28, 2007 Akasaka Akira was arrested for possession of methamphetamines and subsequently fired. To this day, only Uchiumi Kouji and Sato Atsuhiro remain in the company.