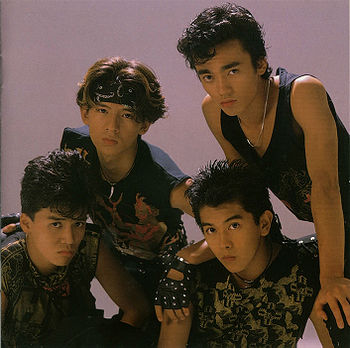 Otokogumi (男闘呼組) was a Johnny's Entertainment band that was active in the late 80s and early 90s. Like THE GOOD-BYE before them (and later TOKIO), Otokogumi was more a rock band than a boys band. Only Okamoto Kenichi remains in Johnny's nowadays.

In 1984, a new group within Johnny's was created: Detarame Rock Band (でたらめロックバンド) with Narita Shouji (guitar) and Takahashi Kazuya (drums). In December of that year, they were paired with Okamoto Kenichi for a photoshoot and he was thus added to the group. In 1985, their band was renamed Tokyo (東京). Soon, two members were added to assist the band: Endou Naoto (keyboard, appeared with the group in a chocolate CM, the song for the CM, Makoto Horetaze was the group's first original song) and Moriya Jirou (drums). The group was renamed Tokyo Otokogumi (東京男組), though they were still seen as just Tokyo, and the last member, Maeda Kouyou was added to the group.

However, Moriya left the group and Johnny's in order to focus on his studies in March 1985. He was replaced by Tsuchida Kouyou (keyboard) who had just joined the agency. The group, without Maeda, became regulars on a Terebi Asahi show: Kin-chan no doko made yaru no!? as of April.

Then Tsuchida left the group to become an actor. The group then shot a new version of the chocolate CM with Maeda (drums). Finally, Endou removed himself from the group because he wanted to dance and was put in Shounen Ninja, another Johnny's group. The group was active with only 3 members for a while until Maeda became a regular member of the group.

When Maeda joined, Takahashi was forced to change from drums to bass but when Endou left, Maeda replaced him on the keyboard. During their performances, they had a back-up band (drums and keyboard).

In January 1986, Otokogumi got their first regular program: Aidoru Hanagumi Otokogumi (アイドル花組おとこ組) and in April of the same year, they held their first concert.

Finally, on August 24, 1988, Otokogumi debuted and released their first single: DAYBREAK and took the first place on the Oricon (and fourth place on the yearly chart). They went on to release 10 singles and 6 albums.

On June 30, 1993, all of Otokogumi's activities were stopped, despite having a summer tour planned and completely sold out, and Takahashi was fired from the company. Their last work as a group was the stage play Slub Boys (スラブ・ボーイズ). Neither the company nor the members ever gave an official reason for the break up. Finally, in spring 1994, Otokogumi's fanclub ceased to exist.

Narita and Maeda both left the company after the group broke up. Okamoto is the only member to remain in Johnny's to this date.