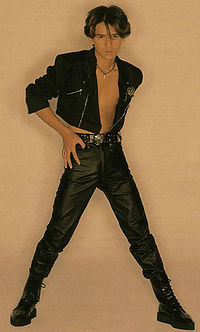 Okamoto Kenichi is a member of Johnny's Entertainment, better known for being part of Otokogumi from 1985 to 1993.

Okamoto Kenichi joined Otokogumi (then Detarame Rockband) in December 1984 and became one of its main members. His played rhythm guitar as well as vocals. In 1985, he and Narita were taught how to play the guitar by Nomura Yoshio of THE GOOD-BYE. When Otokogumi disbanded in 1993, he was the only member to stay in Johnny's Entertainment.